The Great Whyte, was formerly known as the Whyte (Wythte, le Withe, le Whygthe) in Medieval times, it runs North from the High Street and Little Whyte.  Its name goes back to the 13th-century and is Anglo Saxon in origin. It is probably a corruption of the Anglo Saxon word Waite, which means dock or docking area. This makes sense when you think that all boat traffic used it from Medieval times up until 1852.

It is a peculiarly wide street and has in its width, underneath, a river which flows from beyond the village of Broughton through Wistow, Bury and finally into Ramsey. It then joins the High Lode and Bill Lode North of the Great Whyte, these two rivers (or lodes) flowed into Ramsey from the old river Nene, the Bill Lode no longer exists. The High Street passed over the river via the Great Medieval Bridge or the old High Bridge which is said to have had one pointed arch and was built in the 12th Century.

The river that flowed down the Great Whyte was covered over by a tunnel from the NAT West Bank to the chamber near the Memorial Clock. From here it changed to three tunnels, the main tunnel with a smaller side tunnel either side in 1852. The measurement between the buildings on the west side of the street and buildings on the east side measure between 70 – 80ft on average. In the early 1900’s this looked even more pronounced than today, because there was no central island as shown left.

The river made Ramsey an island in the fens, by cutting it off from the higher land going West towards Bury and Upwood. This is clearly shown in the LIDAR map below.

The Ramsey Chronicler, a Monk of Ramsey Abbey, writing about the Abbey in the 12th century, tells us that

‘Because of the river and all the low lying fens and marshes that surrounded Ramsey it became the ideal place for the building of the Abbey. It remained an island and could only be reached by boat until the 12th century when a causeway was built to link it to Bury and Hepmangrove’. 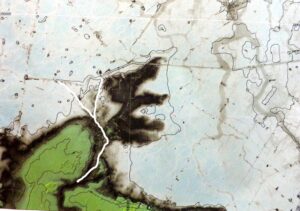 The map shown, is a LIDAR(Laser) map which shows the difference in ground heights above sea level. It plainly shows Ramsey as an Island, which is the dark peninsular shape sticking out from the green coloured area of the higher land to the West of Ramsey. The blue area is the lowest, most at or below sea level, and the grey areas that look like tree roots are the ghostly images of fossilised rivers that existed thousands of years ago. You can clearly see how the island of Ramsey was surrounded by marshes and water on three sides and was effectively isolated from the higher land by the Bury Brook. We have to remember that in Medieval times water and river levels were very much higher than today, then there was no flood defences like we have now. Rivers were tidal and were prone to silting up, which caused the land to become flooded in large areas in the winter and made travel virtually impossible, except by boat.

The white lines show the Bury brook cutting Ramsey off from the higher green land to the left, the white Y shape at the top is the High Lode river which flows off to the right of the map (still existing).  The Bill lode which flowed off to the left,  no longer exists it was filled in around about the time of the culverting of the  bury brook through Ramsey in the 1852.  Both rivers joined the old river Nene which flows alongside the road from Ramsey St Mary’s on to Ramsey Forty Foot and beyond. So these two rivers (Lodes) actually flowed into Ramsey not out.

The river was the main artery for the Abbey in Medieval times, everything needed was brought in by boat, these boats or Stone Barges are ancestors of the Fenlighters and it has been suggested that they were about 30ft long and 10ft wide with a draft of 2ft and had a cargo capacity of about 8 tonnes. Stone from the quarries at Barnack, near Stamford, would have been brought to Ramsey in these boats to build the magnificent Abbey. Grain from the many Manors and Farms that the Abbey owned, in fact every conceivable item needed by the Abbey, would have been brought in by water.

Ironically it was also used to transport most of the stone from the Abbey after the Dissolution, to places like the Colleges in Cambridge, Gonville and Caius, Kings and Trinity to help in their construction. So you could say the river that helped with the birth of the Abbey also helped in its destruction!

From the Dissolution of the Monasteries in 1539 up until 1852, the river flowed through the Great Whyte unhindered and open. This photograph of Upwell which is near Wisbech, gives us an idea of how Ramsey would have looked, when it’s river was open .

In 1774 Lord Orford (he was Lord of the Bedchamber to King George the Third) voyaged around the Fens with a Fleet of nine ships in total. In one account they mention visiting Ramsey, which is described as:

“Built chiefly upon the banks of the river, over which is erected three bridges-two of wood, for the convenience of an immediate passage, and the principal one of stone, consisting of one arch,from which there are two streets branching out equally good but not so long. The houses are regularly placed; and by the improvements lately made, there is a very good path through it upon the side of the river.”

In 1852 there were six bridges that crossed the river, the main one being the stone Medieval one arched High bridge that stood at the junction of the High St and the Great Whyte near the old NAT West bank. The 2nd bridge down the Great Whyte was called Southam’s bridge (position unknown). The 3rd bridge (called Nobles Bridge) was across the river at the Jolly Sailor Public House (pub still there). The 4th bridge was across the river opposite the Family Tree shop (originally called Riddy’s shop). The 5th bridge a cart bridge (called Castledine’s bridge) named after the tenant of the Boat  crossed the river opposite the Boat Public House (now a private house) these bridges were made of wood and allowed for a mixture of pedestrian and cart traffic. Unfortunately no detailed descriptions of these bridges exist today. There was one more bridge the 6th called Bill Bridge, down near the Mill apartments at the Northern end of the Great Whyte. This crossed the Bill lode (river), the river no longer exists today nor does the bridge!

The river, until it was covered in 1852, was used by the Town’s people to bring in goods needed and take out goods to be sold in other parts of the County and beyond. Although the river flows from Bury into Ramsey then joins the Highlode at the North end of the Town, barges would have sailed into Ramsey from the Highlode end and would have moored up as far as the Little Whyte junction in Town. No doubt the river also presented a great danger to Ramsey in times of flooding.