This article is taken from the Hunts County News printed in 1888. It deals with the contribution towards the expense of the Clock and where it was bought. The maker of the clock mechanism came from London.

You will see there is a description of the working of the the mechanism but it is still unclear how it actually worked. We know that the propeller that was immersed in the river, drove the gear wheels to move the wire which went up into the clock column. These wires then somehow lifted weights which would be responsible for driving the pendulum and this in turn would turn the gears to the hands. This is as much as we can logically work out.

A happy idea suggested itself to the committee entrusted to carry out the above desirable object, that of making the erection a memorial to the late Right Honourable Edward Fellowes, first Lord De Ramsey, from the parishioners of Ramsey, in token of the respect and affection entertained by them for his late Lordship. We understand that on hearing of this decision on the part of the committee the Dowager Lady De Ramsey expressed a wish to be allowed to contribute £100 towards the object in view, and, in communicating her desire to the committee.

Her Ladyship writes: “It would be a great happiness to me to be associated with the parishioners of Ramsey in a memorial to my dear husband, in which all who wish to do so may join, irrespective of political or religious views, a memorial too, which will be a useful and ornamental addition to the place we both loved so much.”

We understand the subscription list is now open and will be closed the first week in April, and, in the meantime, the name of intending subscribers may be sent to the committee or to Mr. Ed. Southam, their honorary secretary.

The dials have now been fixed, and also the machinery. The clock itself is supplied by Mr. Hall, of Peterborough. The movements are made on the latest and most improved principal, working two foot dials; the movements are fixed in the base, and are connected with the dials above by a shaft with improved universal joints. The clock is so arranged that the gas can be turned on and off automatically, and is supplied with a compensating pendulum beating true seconds (shown left) This pendulum bob has just been re-found at the Rural Museum where it was donated  by a Mr Pickard of Ramsey Heights, in 1997. 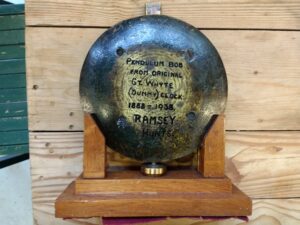 Steel wire lines work through pulleys at right angles, and are 30 feet in length. The dials are white opal with dark blue figures.

The clock was manufactured by Messrs. Sainsbury Bros., of Black Horse Lane, Walthamstow, London, who are the inventors and makers of the large mechanical clock at St. John Bennetts, which simultaneously shows the time at all the capitals of the world. This firm has had the construction and repairs of the principal clocks in London and provinces, including the famous one outside the Houses of Parliament. Mr. Sainsbury, senr., fixed the clock at Ramsey himself, that being the usual custom of the firm. Unfortunately the centre of one of the dials was slightly cracked, and another had to be obtained from London. This is the only mishap that has occurred.

The clock will be illuminated inside and out, the outside with four large round, and not oval, lamps as we stated last week. The whole forms a very handsome piece of workmanship and is quite an ornament to the market place.