Building of the Culverts

If we analyze the Vestry minutes from 1838 – 1854 we can see that the construction of the culverts took place in (three) phases. The first phase was a partial arching over, the builders were not recorded. The other two phases were built by different contractors working presumably at the same time at one point in the construction?

There was a partial arching of the river in 1841, when the offer of 25,000 bricks, by Thomas Darlow, was accepted to arch the river from the High Bridge to Descows steps. The position of these steps unfortunately is not known! so the length of the culvert is unknown as well. I’ve been doing some calculations on this work, if the culvert was the same dimensions as the main culvert is now  it would have been at least 65ft long. At this time also a decision to widen the medieval town Bridge, to the width of the street, was taken by filling in the Horseware ( no one I’ve spoken to seems to know what this word means! it is possible it was an area next to the medieval bridge where horses would be brought to be washed ).

Phase One of Complete Culverting 1852

The building of the Main culvert (10ft across external measurement), as close as I can tell, started possibly in the April of 1852, from the High Street end of Town. The River was probably dammed, at the Flagholt end of Town, the back of the George Hotel, and also at the North end of the Town near High Lode and Bill Lode junction. Stopping the flow through the Town, this would have allowed the builders to construct the culvert in the bed of the river. The bricks estimated at over 2,000,000 used, would have had to be transported up the river, before this, through the Town and strategically placed in different places along the river bank. This would  have enabled the Navvy brick layers to access them more easily. This is only my theory, there is no written evidence of how it was done. We also must take into account that at this time there were five bridges across the river along the Great Whyte. I believe that the construction of the main culvert took place in the bed of the river after it had stopped flowing due to the damming process. This would mean that it passed under the bridges mentioned and that the people of the Town would have been able to see the construction of what they called the Arches. Whilst going about their daily lives.

How long it took the Main Contractors Messers Booth and Lunn (place of origin unknown) and their workforce to build the 2240ft long Culvert is hard to estimate, because the actual start and finish dates are not really recorded. Looking at the Vestry minutes we see that April 1852 looks like the probable start date and in August 1852 a meeting took place, at the Bill Bridge the North end of the Town to look at work connected with the culvert and to consider building a Basin for Navigation purposes and docking, Mr Allen the Architect from St Ives produced the drawings.

November of the same year(1852), after seven months of building, the culvert burst due to a strain being put on it by excessive amounts of water flooding through the culvert after severe rain. This was followed in the Summer of 1853 by a similar disaster. It suggests that the dam at the Flagholt end of the Town must have been breached by the severe flooding of the Bury Brook and in turn letting the water flow down the unfinished culvert. There is no record of how much of the main culvert had been built in this period of about 14 months. Because of these two disasters, there was correspondence between the Committee and the Architect Mr Allen, to consider a solution to the problem.

We are told that in October 1853 a letter had been sent by Mr Walker the Middle Level Engineer, who had looked at Mr Allen’s plans, for the addition of two lateral or side culverts, to Edward Fellowes telling him that by building the two extra side culverts they would only lose 11% of the original area given by the original High Bridge arch span. From this statement we can work out the span of the Medieval bridge, shown below.

If you add the 10ft Main 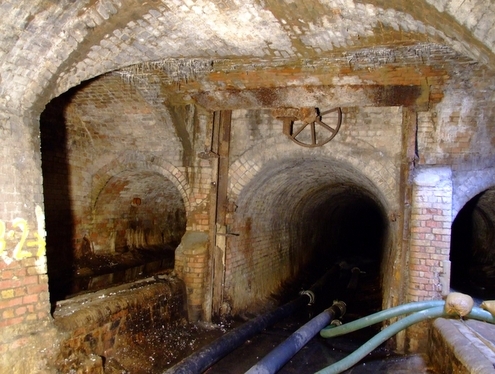 Culvert width to the two 6ft side Culverts you get 22ft, taking the above loss into account, we can work out that the High Bridge Arch must have been 24ft across. This is the only indication we have of the span of the old Medieval Bridge, there doesn’t seem to be any records of size or indeed any sketches of the Bridge.

Even though there are sketches of the Great Whyte when it’s an open river as shown below, by local artists J.A.Poulter who lived in Bury (Huntingdonshire) and Heathcote who lived at Connington Castle Holme Fen.

These sketches are dated from the 1840’s. At this time the High Bridge was still there, so it is reasonable to expect that one of these artists would have recorded it? But up to now I haven’t found anysuch drawing.

It was agreed to give the second contract , for building the two side culverts , to Contractor Messers Coker and Oakes, who came from Swaffham, for a tender price of £2095.5s.  The Surveyor of Highways were requested to give directions for the work to start as soon as the weather permitted and the Contract was signed.  This was twenty one months after the initial start of the main culvert and assuming December was the start it obviously took a year to build this phase two because all the culvert system was finished by December 1854.

If the construction of the main Culvert started in April 1852 and the whole system of culverts were finished in 1854.  Then it took two  years and eight months to complete the whole job.

This is the last of the information we have concerning the culverts, the work obviously took place because the tunnels are there to prove it, but we don’t seem to have anymore details of timescales!