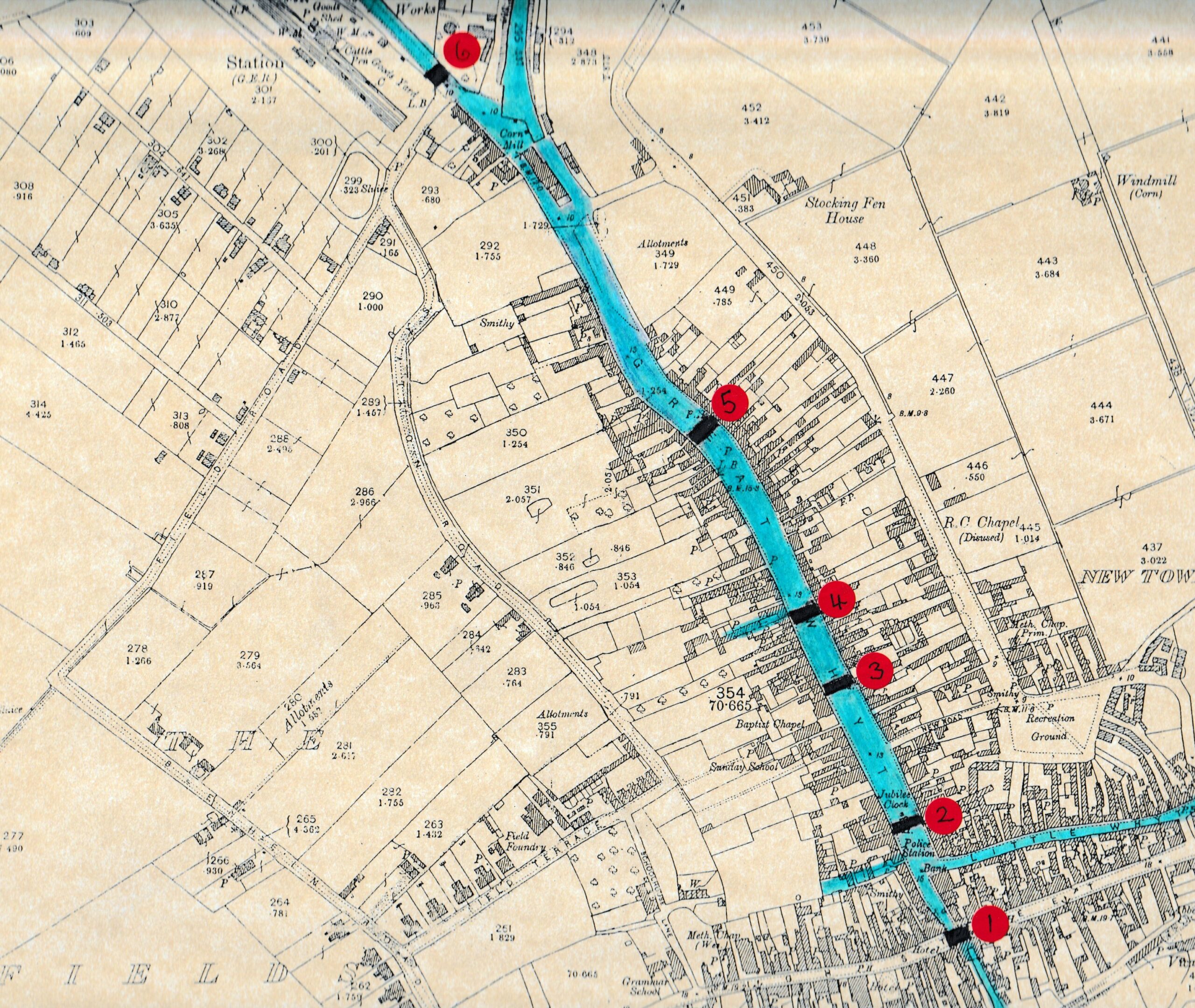 The map shown, is dated 1901, I have used it to show the Great Whyte  coloured  blue, so you can see where the open river ran. The six Bridges are marked in brown, in the exact places they would have been, and numbered. They were built for the people of Ramsey to have easy access to both sides of the river.

This is what Ramsey’s Great Whyte would have looked like prior to 1852, before the Culverts were built. Fenlighters would have had access from the Highlode end of Town and sailed up the Gt Whyte to the Little Whyte junction.  There they would have been moored and unloaded. Typically they would have brought in coal, peat and many other goods to Ramsey, as well as taking cargo out to other parts of the Country.

Below is a list of the Bridges what is known about them and where they were situated.

This was the oldest bridge, built of Barnack Stone from a Quarry near Stamford, we are told it was a narrow one arched bridge which was high in the middle and it dated from 1200. It was built by the Monks of Ramsey Abbey to bring in Pilgrims, and trade to the newly established Town of Ramsey. Until this time, Ramsey was still an Island and could only be reached by boat. Unfortunately there are no paintings of this bridge so we have no idea of it’s size or what it would have looked like!

This was called Southam’s Bridge. John Southam established the Vine Inn on the Great Whyte in 1838. It was the only establishment to sell wine and spirits at that time. John appears in trade directories as a spirit merchant from 1838 to 1869.  The site of the Vine is where the B&M Express supermarket is now.

John also has the distinction of having one of the bridges across the Great Whyte named after him. We don’t exactly know where this bridge stood in relation to the Vine. but it would be logical for it to have been close by his shop.

This was called Noble’s Bridge. It crossed the river close to the Jolly Sailor Pub, the pub is still there.

This bridge crossed the river opposite the Family Tree shop which is no longer trading. It was originally called ‘Riddy’s Shop’.

This was a bridge to be used by Carts (called Castledine’s bridge) named after the tenant of the Boat. It crossed the river opposite the Boat Public House (now a private house).

This Bridge called Bill Bridge, was down near the Mill apartments at the Northern end of the Great Whyte. This crossed the Bill lode (river), the river no longer exists today nor does the bridge!